The search for the needle in the haystack

More than 8,000 potentially dangerous shipwrecks lie at the bottom of our oceans. More than 1,500 are tankers. More than two-thirds originate from the Second World War. The majority of them must be regarded as acutely dangerous to marine flora and fauna. 70.7% of the earth’s surface or 360,570,000 km² are covered by water. Even if we make our wildest dreams come true quickly and send 100 research ships in the medium term, each of them will have 80 wrecks scattered over an area ten times the size of Germany to search for, find, investigate and decontaminate.

Fortunately, the situation is not as hopeless as it seems! The – at least approximate – position of many wrecks is known, which significantly limits the search effort. The majority lies in moderate depths in the epipelagic (up to 200m). Unfortunately, this is also the most “sensitive” area of the oceans. 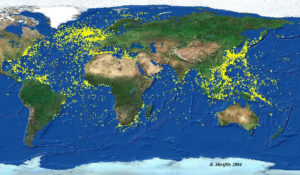 Our activities aim to defuse as many wrecks as possible and to create broad awareness of the hitherto little-known threat. Cleanwreck.org is a non-profit project, all revenues flow back into the investigation and treatment of the shipwrecks. Therefore, in return for decontamination, the exclusive diving rights or the rights of economic use must be negotiated with their owners (in the case of warship wrecks usually the flag states¹) and if necessary with other legal entities (coastal states). The latter and additional wreck sponsorships will finance the decontamination and the marketing of the diving rights will cover the running costs of Cleanwreck. With a Diver Membership, ambitious divers can directly participate in the exploration of the wrecks and dive them themselves.

In cooperation with historians, naval archives, museums, etc., the positions and hazard potential of all sunk and sunken ships (with a focus on WWI, WWII) are clarified as precisely as possible in advance and recorded in our wreck database.

The wrecks to be located are searched by sonar. Typically, echosounder, multibeam echosounder, side-scan sonars, and other research equipment as used in bathymetry / hydrography are used. They can also be used to create high-resolution 3D images of the seabed and any shipwrecks lying on it. Under good conditions, about one square kilometre (approx. 0,38 square mile) of the seabed can be scanned per hour. 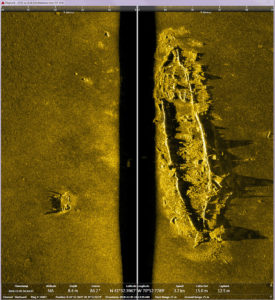 In the case of “sonar hits” which suggest wreck findings, more detailed investigations will be carried out. Depending on the depth, further investigations are carried out using ROV (Remotely Operated Vehicle) or direct diving. Special techniques and equipment developed by us for this purpose, similar to that used in technical diving, enable us to carry out comparatively inexpensive investigations of actual wreck finds. This enables us to identify them quickly and to make an initial assessment of their hazard potential. The urgency and possible measures are then analyzed.

The main tools for this are our 2HE-1 and the S&I-Fleet – comparatively small, autonomously operating sailing research vessels between 10 and 17 m. Stationary and mobile diving equipment and above all, of course, a highly qualified Tec diving team enable us to routinely dive wrecks up to a depth of 150 m directly and to carry out the necessary investigations for the preparation of a report. At greater depths a diving robot (ROV) takes over these tasks.

Negotiations on the rights

In a further step, the rights to the wreck concerning salvage and diving must be negotiated with the owners. This may be more difficult and time-consuming than searching, investigating and decontaminating the wreck itself. In the absence of internationally applicable rules, but of vague political attitudes (of course, there are rapidly changing attitudes regarding wrecks that “only” pose an environmental threat and those where valuables are suspected), a legally binding agreement must be reached for each wreck. A further complicating factor is that warship wrecks are often regarded as naval war graves and are thus subject to the protection of the Geneva Conventions.

Common sense suggests that marine protection should be placed before war grave protection, but there are no internationally binding rules for this either.

After successful negotiation of the rights to the wreck, the best possible decontamination of the wreck is planned and implemented, if necessary (usually the case). Depending on the type of environmental threat, this can range from a “simple” extraction of (heavy) oil to a highly complicated, dangerous and cost-intensive recovery of explosives or other toxic substances.

In a preliminary final step, the wreck will be conserved, surveyed and protected according to the principles of the Convention for the Protection of Cultural Heritage under Water² and historical criteria. Wrecks at suitable depths will be established as dive sites. This includes the installation of a descent or mooring line to avoid damage to the wreck and/or the seabed caused by anchors. Besides, if necessary also the securing of the wreck. Depending on its classification it means – for example – welding hatches to prevent penetration into the wreck, or the exact opposite, namely the permanent opening of the wreck to create secure exits. Finally, all information relevant for safe diving, such as dive site description, maximum depth, risks, emergency plans, training levels, and other minimum requirements are transferred to the wreck database.

In our wreck database, we record all potentially dangerous shipwrecks worldwide. The results of the research carried out in advance are compared with other similar databases. Localised wrecks are continuously updated and their investigation results, conservation, and decontamination status recorded. At the same time, the currently valid conditions for individual divers are announced.

Together we will make it! We appreciate your interest, your support and your participation in the Marine Conservation Project Cleanwreck! More in the next chapter Co-Creation…

¹ State under whose flag a ship sails or sailed